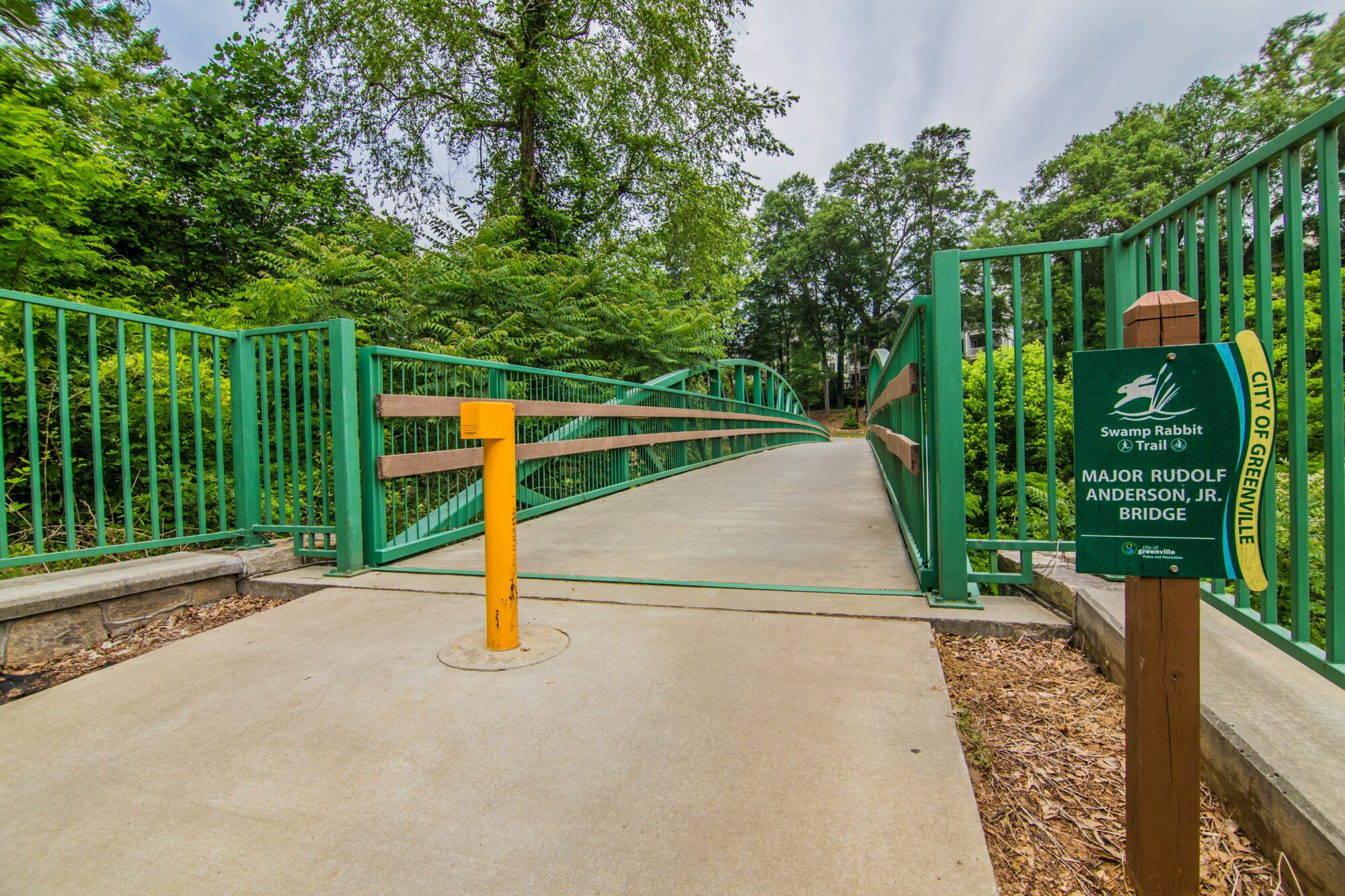 Recently named one of the top 10 places to live in 2019[1], the 27th best place to retire[2], and one of the 10 most romantic getaways[3], Greenville, South Carolina is no stranger to accolades. For many, however, Greenville was not on the map 10 years ago. 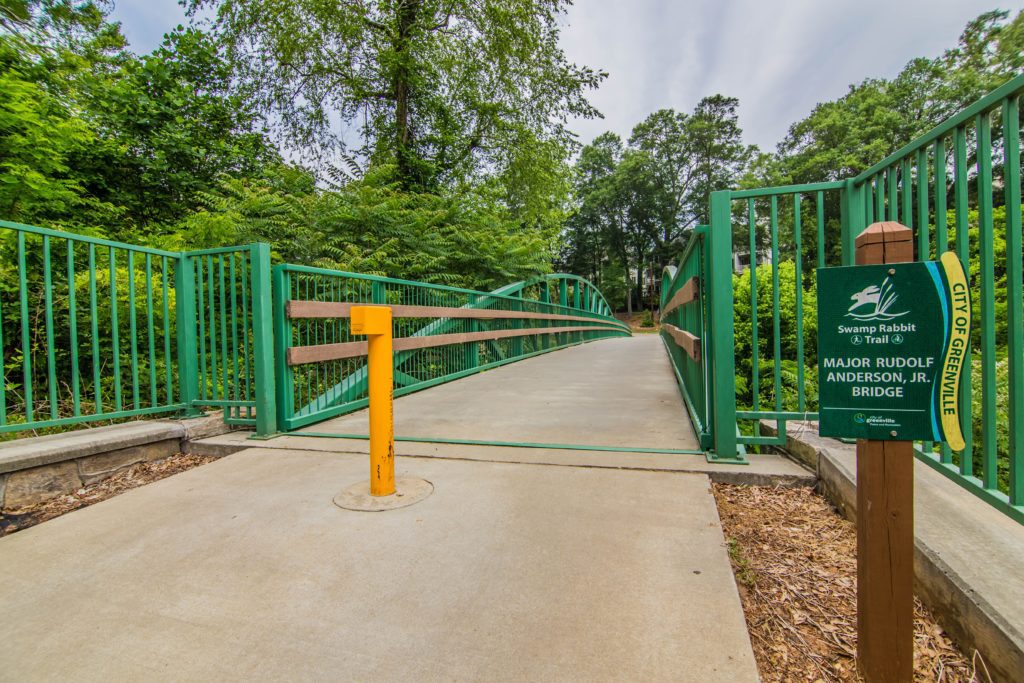 Among other projects, the Prisma Health Swamp Rabbit Trail system is one of the key factors in this town’s success. The history of this railroad turned multi-use path within the Upstate of South Carolina is a long road, or trail, of inspiring community development.

What is now known as a thriving transportation and recreational trail system began as a partially completed railroad project dating back to the late 1800s. In a time of frenzied railroad construction, the Carolina, Knoxville & Western Railroad was born in 1889. Modeled after hundreds of similar projects across the country, the railroad had plans to stretch roughly 300 miles, connecting Greenville County to the Atlantic Ports and Tennessee. However, two years later, the railroad went bankrupt with only 12 miles completed. From hauling timber to weekend passenger service, the rail was then used by many owners for different purposes, never expanding beyond Greenville County. Along the journey, the name for the railroad became “The Swamp Rabbit” –coined by passengers for the way the uneven tracks “hopped” through the Reedy River wetlands.

It wasn’t until 1998 that the railroad was purchased by Upstate Forever, a local nonprofit who launched a campaign for public acquisition of the line to convert it to a trail. Now a 22-mile multiuse greenway, the Swamp Rabbit Trail system stretches from north of Traveler’s Rest through Greenville. It is used by over 500,000 people annually with 18-25% of those people being tourists. The trail generates nearly $7 million in tourism-based revenues for Greenville County each year.[4]

Ty Houck, Director of Greenways, Natural and Historic Resources for Greenville County, has been overseeing development and operations of the trail since 2007. Dubbed the “Father of the Swamp Rabbit Trail,” Ty is quick to credit the large community of support behind the project. To Ty, the Swamp Rabbit Trail system offers much more than a weekend bike ride.

In his words, “This is a bigger system than just a trail.” For some Greenville County residents, it is a lifeline. To the 28% of Greenville residents who do not have a driver’s license, the trail opens opportunities for a quick bike ride or walk from home to community destinations.

When asked why the trail is important to the community, Ty shares stories of the life changing effects the trail has had on many residents. The accessible nature of the flat, paved trail has caught the attention of many individuals in wheelchairs. Developments of zero entry homes have been spurred by the trail, allowing hand cyclists to get from inside their homes to the trail system with ease. 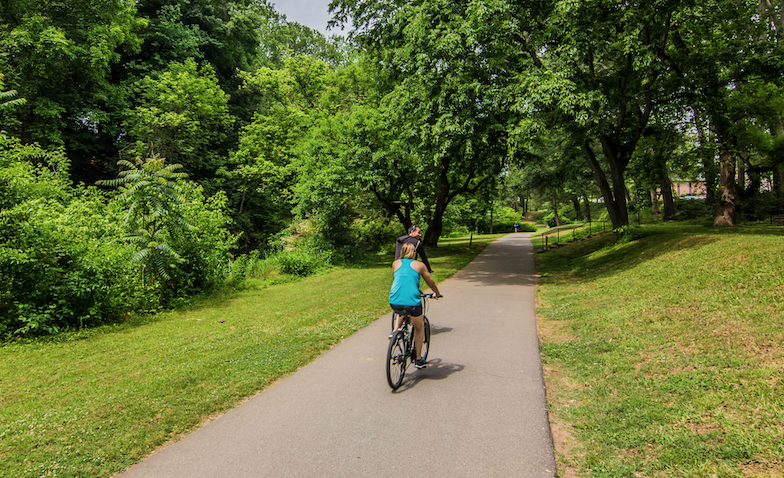 Brad Halter, Chairman of Coldwell Banker Caine and Coldwell Banker Commercial Caine and lifelong Greenville resident, comments on the growth the trail has encouraged in Greenville. “It has been remarkable to see long ignored corridors in town become a catalyst for economic growth – and even more than that, health and quality of life.”

Matt Vanvick, broker with Coldwell Banker Commercial Caine, experienced this firsthand in representing the lease for Craft Axe Throwing, a unique game center franchise. When the operation moved to Greenville, the owners were especially interested in a developing area of town that would draw foot traffic. Hampton Station was the perfect fit. Situated in Greenville’s Old Water Tower district, this development features a taco shop, brewery, CrossFit gym, and of course, it is directly connected to the Orange Line of the Swamp Rabbit Trail system.

Real estate developers like Drew Parker of the Parker Group, also view the trail as an opportunity. The Commons, Drew’s current project, is turning an old mill into a center for office space and local restaurants. In Drew’s words, people are looking for experiences and authenticity. Now, instead of simply going on a bike ride, you have the option to bike to a brewery, to lunch, or for a cup of coffee.

The movement has inspired development outside of Greenville as well. Travelers Rest, the once sleepy town 15 minutes outside of Greenville, was named for its function as a stopping point for travelers passing through on their way to the Western North Carolina mountains. Now, a mini epicenter for culinary and brewery excellence, the town has outgrown its name. Much of the transformation happening in Travelers Rest is credited to the Green Line of the Swamp Rabbit Trail.

This “rails to trails” phenomenon is happening across the country. In Traverse City Michigan, the TART is a 10.5-mile-long paved trail that was spurred from the economic revival of a rail corridor in Traverse City. The trail has encouraged residential and commercial development throughout area. Hotels, apartments, a new cycle shop, a winery, and a clothing store joined the region, to name a few.

The success of TART, the Swamp Rabbit Trail and similar projects is only growing. Greenville County Rec views the Swamp Rabbit Trail system as an opportunity for the entire upstate expanding like a subway system or like Ty likes to say, “a road network without cars”. Cities throughout the Upstate are joining the broad conversation and looking into easement agreements to create and connect trails. Ideally the pieces of the trail will all connect together one day.

For the Swamp Rabbit Trail system, the Cinderella story is not finished yet. The simple ribbon of asphalt continues to expand in multiple directions connecting people to places in their community. Transforming once forgotten corners of old mill communities into vibrant centers of activity, the undeniable economic impact continues to grow. Beyond South Carolina, the rails to trails initiative weaves throughout the country. Coldwell Banker Commercial recognizes the entrepreneurial and resourceful nature of this movement as something to keep our eyes on. From the Swamp Rabbit Trail in Greenville, SC and beyond, we hope to see you on the trail soon!